Every year, workplace employee campaigns make up nearly 70 per cent of the funds raised through the United Way Kingston, Frontenac, Lennox and Addington’s annual campaign. Through workplace events and employee giving, workplaces in our community are always supportive through their generous donations and willingness to spread the word about United Way. A question that’s often asked is: what makes a workplace campaign successful? 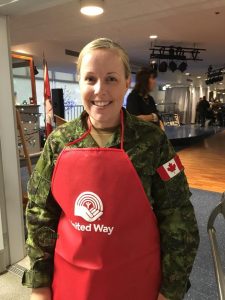 To answer that question, United Way KFLA caught up with Maj. Erica Lidington from CFB Kingston. Lidington was the Employee Campaign Chair (ECC) at the base in 2018 and was instrumental in helping CFB run their most successful campaign to date, raising more than $275,000.

“I was thrilled to come on board as the ECC last year,” she said. “I was involved as a donor before and helped my squadron be successful in years past so taking on more responsibility seemed like a natural fit.”

Lidington remembers training for her role as an ECC starting back in April 2018 at a peer learning session coordinated by the United Way. She was eager to learn and admits that when she takes on tasks she tends to go above and beyond.

“I knew that I was going to live and breath it and I wanted to know everything I could about the United Way,” she said. “I think when you have someone who is really passionate in the role of ECC it is infectious and you need someone who truly believes in the campaign.”

She encouraged unit leaders to approach the campaign in the same way and credits the amount of training and knowledge that each of them gained throughout the campaign as being the key to their success.

“I gave no options – I told the reps that they would attend training sessions and tours, and gave them dates to chose from. Being in uniform, I have the opportunity to be a little more direct with our personnel and I think that paid off,” she explained. “What they were able to learn and see was tangible and then they were able to bring that back to the unit lines and speak to it and speak truthfully to it.”

Members of CFB Kingston at their touchdown BBQ

Throughout the campaign, members of the base also had an opportunity to hear from speakers with lived experience and take part in Seeing is Believing Tours where they heard form organizations first hand and saw where the money they were raising was going. In some cases, Lidington also made an effort to make the need to give even more personal.

“We did highlight for the members that causes that are close to their hearts are part of the KFLA campaign – the Kingston Military Family Resource Centre was a really big part of that,” she said. “It was a different angle and it seemed to resonate – they are willing to support the community, but when they can relate directly to programs that they may use themselves then that was really impactful.”

Last year, the United Way helped over 53,000 members of the community through 42 agencies and 64 programs. For Lidington, this impact and this need to help the broader community is what the campaign and her role as ECC are all about.

“We belong to a community and this community really supports the base 110 per cent,” she said. “We have an obligation to support those programs because they directly affect us as well.”

Lidington also realized that the major part of workplace campaigns is the individual donations that generally happen in the form of payroll deductions, not the big events that we all see taking place throughout the fall.

“We have some larger events, but that is not what generated major revenue for us during the campaign. It does keep the momentum going and really keeps the United Way on the radar, but it doesn’t raise big money,” she said.

This momentum can be hard to keep up at any workplace, but is especially difficult at CFB Kingston where members may be posted and have to leave mid-way through a campaign.

“Our units change each year,” she said. “It is challenging and that makes it hard to set campaign goals and in our case, work to surpass them each year too. I would love to say that we will beat our goal next year, but it really depends on a variety of circumstances.” 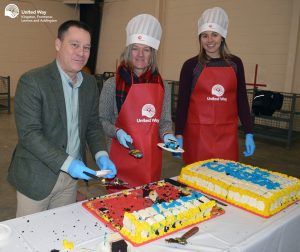 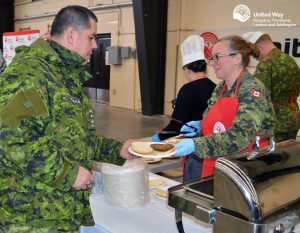 Lidington herself is moving on to a new position this year and as a result she won’t be returning as ECC for the base, but she does have some advice for her replacement and ECC’s across the community.

“You need to completely believe in the campaign and what it does. Know that you are making a difference and you need to have 100 per cent committal from the start,” she said. “You have to be available and keep the momentum going – it is all worth it in the end.”