The issues we face as a community can only be addressed when all in our community feel welcome and live with hope, dignity and a sense of belonging. United Way of KFL&A will demonstrate its ongoing commitment to represent the diverse nature of our communities, promoting and practising inclusion in all things we do.

We join community partners in remembering the 215 children killed as result of cultural genocide at the Kamloops Indian Residential School in Tk’emlúps te Secwépemc First Nation territory. We extend our sympathies to survivors, families and First Nations communities affected by this tragedy. This serves as a stark reminder of the need to recognize not only our past, but our present, and is an urgent reminder for all Canadians to work towards truth and reconciliation.

Local artists, Lee Stewart and Bree Rappaport, worked with youth from One Roof and Indigenous Consultant, Waasaabiidaasamose Kwe to design and paint a beautiful mural inside the main space at the hub. Learn more about the mural from the story “Through the eyes of Moshomis” below.

Through the eyes of Moshomis

Mishomis has taught me to understand the seven grandfather teachings, and this is my story of how I see them coming alive in each and every one of us. We don’t realize, until we start walking, how many teachings we already have. This mural is dedicated to all the youth of One Roof. Present, Past and Future. Gitchi Miigwitch to Bree Rappaport, Art Teacher, Leahurst College who took on the challenge of the dream and brought her friend Lee Stewart, a local Cree artist. It is because of you two that this beautiful work of art has come to life through my story. I can’t forget Natasha, Aiden, who asked for the mural and Colleen and all the other wonderful staff who help our kids. Thank you for helping our kids.

Through the eyes of Mishomis…….

My story starts in the “first man and his grandmother” part of my creation story known as Mishomis. Mishomis means grandfather in Ojibway and as first man is walking and naming all the plants and animals, he hears a voice that says…your grandmother, she lives across the water. First man makes his way to his grandmother’s lodge and right away grandmother tells him to go and get fire. She shows him a small light towards the east and he can hear a faint but beautiful sound coming from that direction. He sets out on his way, equipped with everything he needs; a beautiful new buckskin suit, new moccasins, a bandolier bag full of food thinking how hard can it be. As first man is walking, he comes to a part of the land that is very rocky with big crevasses and he has to be careful, or he could get hurt. After he gets across, he notices that the land there is black, and the trees are all down. He is sticking and sinking as he tries to cross. He can hear that beautiful sound getting louder and that light from the firekeeper’s lodge is getting bigger. He ties two birch trees to the bottom of his feet and rubs deer tallow on them to make them slick and boy oh boy he can just ski right across the pitchy part of the land. Ugh he yells, now there is a lake. He remembers earlier in the story that he watched a beaver make his home and he also watched how he moved his tail. He learned how to make an oar in the likeness of a beaver’s tail, and he made a canoe and got over to the firekeeper’s lodge, and the door opens, and it smells nice, and he’s invited in and welcomed. It’s warm and there is food and then he sees her, and he feels a burning sensation in his chest that takes his breath away. It is the firekeeper’s daughter and he loves her. They marry and have four sons and then…oh my grandmother…oh yes you must go back and take this gift of fire. The firekeeper put the gift of fire in a mishomis, a rock. He has to be really careful as he makes his way back with more to carry and if he dropped it in the water, it would surely go out and if he dropped it on the pitchy, sticky land it could be a disaster, wildfire. He has to careful crossing the deep crevasses or the gift of fire for his grandmother could be gone.

He makes it back to his grandmother’s lodge and makes her a beautiful home. She is very proud of first man and gives him a name. She says you are now going to be Anishinaabe, I love you grandson. Grandmother tells him she will be ok and he is such a wonderful boy, yet now a man, and that he must now go back to his family. He makes his way back and he is always thinking of his father who lives in the west and his mother who lives in the east. He’s learned many stories from his grandmother and wants to go west to meet his father. He asks his wife if he could go west to find his father, but she says,” nooooooooo, you just got back, I don’t want you to go.” She remembers the teaching that the Creator gave her when she had her children. She also remembered the ache in her heart when her children left. She knew she had to let him go meet his father to be fulfilled. As Anishinaabe starts his journey west, he again has everything he needs. He starts to realize that he has some visitors walking with him. The beaver (wisdom) looks up to him and says, “hey brother where you going?” He tells him he is going west to meet is father. You see once you have the teachings, they become your brothers. Next, he sees the wolf
(humility) and he already knows wolf because earlier in the story as he was naming all the animals, he realizes that they are all in pairs, yet he is alone. He asks the Creator if he could have a companion and the Creator sent him the wolf. He walked with that wolf for seven years. Overhead he sees the Eagle (love) soaring high, watching over him. He has felt love because he is married to the firekeeper’s daughter and has had four children. That burning in his chest was just that, love. That thing that comes along and kicks you right in the chest and steals your wit. It takes your breath away. Anishinaabe is happy on his journey. He feels he good, happy, a spring in his step and this is where he hops on the turtle’s back (truth). He starts to realize how far this walk is going to be. All of a sudden, all his little brothers have scurried off, it’s quiet. It’s getting dark, where did everybody go. He comes to a big, long black wall. What’s this? He realizes it’s a row of Buffalo (respect). He can’t get around it, over it, under it. The leader says to Anishinaabe, “Have you no respect for yourself. You can’t walk across the prairies.

The wind is so fierce it will pick you up and blow you away, the snow gets so deep you can’t walk. He says, I am the Buffalo, I am the only one that can survive out here. Anishinaabe says back, “You cannot dissuade me, I am going west to meet our father. Four days and four nights pass. This is the teaching of the first fast. Finally, one of the Buffalo steps forward and says, “we cannot dissuade him so we must help him.” They tell him how proud they are of him and that they want to help him so when the weather gets too tough for him, he is to jump up in their mane and they will carry him. When they get to the Rockies, buffalo says goodbye and gives him all the respect he deserves. He continues on in the mountains seeing all the beauty of snow and flowers and different animals, and all of a sudden, he comes face to face with a grizzly bear (courage). As he cannot be dissuaded, he stares down the bear and bear says that most are more afraid of him. He tells him he has been watching him and has noticed he has great courage. As they walk, the bear tells him all he knows of the land, the roots, the berries and that his job is to watch out for the community. Bear wishes him all the best and tells him how hard it is going to be for him to meet the oldest brother. He has no home he lives in a swamp, and he is ugly with big red eyes. Sabe (honesty) is a rare siting. Not many get to meet Sabe. Although he cannot be dissuaded, he is afraid, he wanted to run as Sabe appeared to him. He tells him he has been watching him and he knows his thoughts. He tells him he must continue to respect all things, “including yourself,” and grants him passage, because to meet father, you must get past all the brothers. Anishinaabe is exhausted and falls asleep under a big tree. He begins to dream, and he hears a woodpecker knocking, this means someone is coming. Someone is brushing his face and he wakes up. It is his father, a giant of a being and he jumps on him swinging, fists clenched, yet hugging. Father! Son! I have many questions for you. They talked for a long time. Sometimes they talked about that beautiful sound in the east, his mother and he realizes that all his life was there, between east and west. Father Sky to Mother Earth.

Father tells Anishinaabe he is so proud of him and now go back to your life. Before he goes, he relays the message from the brothers that all his loud rumblings scare the babies. They laugh and he sets back east with a spring in his step and chi nooden (big wind) comes along and picks him up and as he is passing, all his brothers are waving to him with smiles of encouragement, and he is back home. 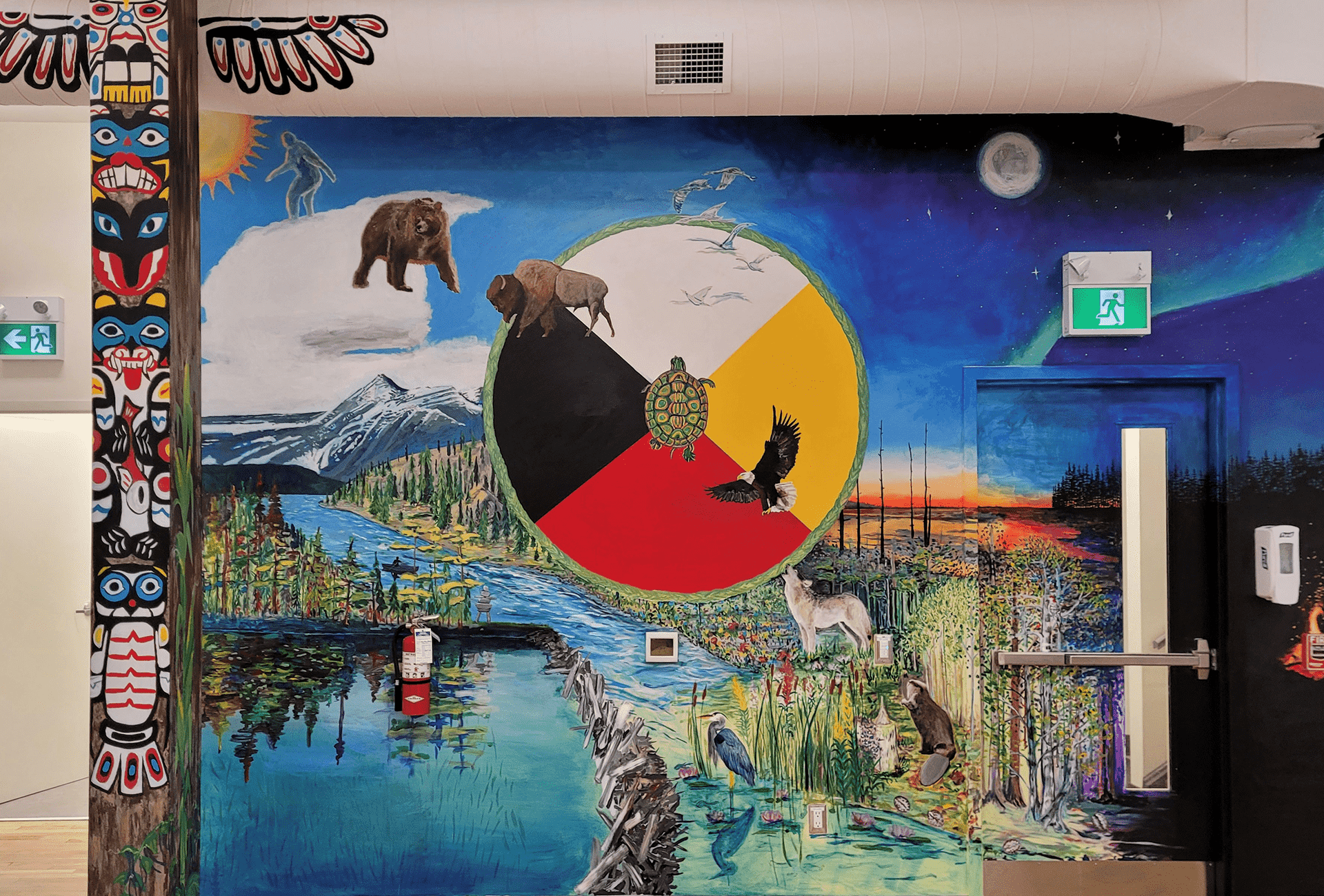