About Retirees United: The goal of the Retirees United initiative is to engage retirees and those about to retire, including those who are leaving a local workplace as well as retirees moving to Kingston and area.

Local Network: KFLA has a growing number of retirees in the area.  With its proximity to three large cities (Ottawa, Toronto and Montreal), its waterfront, housing options and active arts and culture, Kingston has been identified as one of the top 3 Retiree destinations. This is in large part due to military personnel who return to a city they enjoyed during their term. Kingston also has a large number of retirees from manufacturing, where many plants used to be the largest employers, and education, with educators and staff retiring from Queen’s and the school boards.

In the Kingston area 32 per cent of the population is over the age of 55 years. It is likely this trend will continue as the region continues to attract retirees.

Local Impact: It is reported that 1 in 4 seniors don’t feel connected to their community. United Way of Kingston, Frontenac, Lennox and Addington would like to change that. We would like to see retirees and seniors stay healthy and active by getting involved in their neighbourhoods, utilizing community resources that keep them physically active, socially connected, valued and able to better cope with life’s transitions.

The Retiree Task Force aims create a sense of belonging for retirees by engaging them in their community, connecting them to peers and giving them the opportunity to make meaningful contributions of both time and resources.

“My wife and I have always donated to the United Way KFL&A because we know the donated funds are used in our community. Being a grandparent, I am conscious of the need for children to have a supportive and learning environment, and healthy food from an early age. In my retirement, I have become more aware of the people in need in our community. I encourage you to support these vital programs by volunteering and by making a donation. Through the United Way you make a difference in the lives of so many.”
– Jim Parker

Are you planning to retire? Check out our Retiree Guide for some helpful tips.

Pension Deductions
Check with your workplace. You may be able donate through monthly pension deductions once you are retired.
Monthly Giving
You can conveniently give a monthly gift through credit card or pre-authorized payments.
One Time Gifts
Cheques, cash or credit cards are accepted.
Gifts of Securities
Gifts of securities may provide you with even greater tax benefits than charitable gifts made in cash.
Bequests
You can continue your tradition of giving by leaving a bequest to the United Way in your will. Through the Endowment Fund, the principal is permanently preserved and the interest supports programs.
Life Insurance
Gifting a Life Insurance policy or naming United Way as a beneficiary of your policy can be an easy and effective way to continue your support. 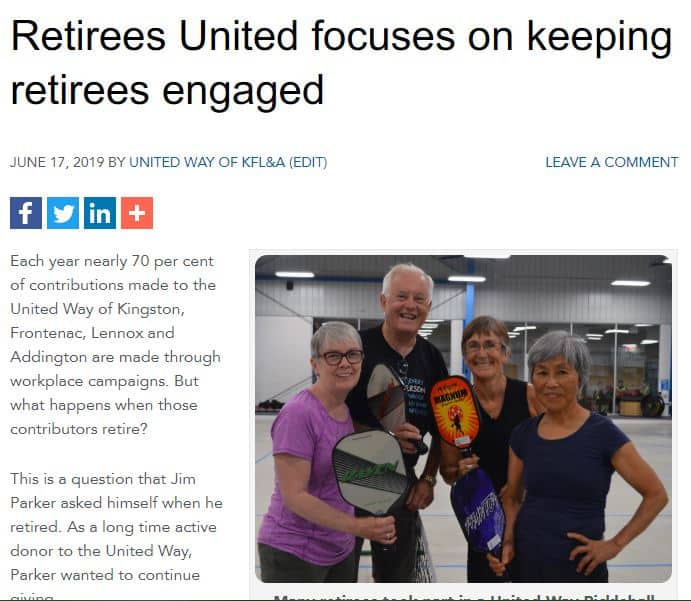 For more information about Retirees United check out this blog post: https://www.unitedwaykfla.ca/retirees-united-focuses-on-keeping-retirees-engaged/

And to learn more about how to get involved, please contact leadership@unitedwaykfla.ca