News – For local businessman and philanthropist A. Britton Smith, Kingston has always been home; now he hopes to provide that same feeling of home for young people struggling with homelessness in the city.

On March 2, the United Way announced that Smith would be donating $1.2 million to the organization in support of a new home for homeless youth ages 16-19. 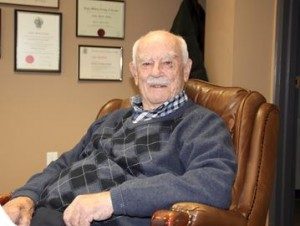 A. Britton Smith Photo/Mandy Marciniak A. Britton Smith is the owner of Homestead Land Holding Limited and recently donated $1.2 million to the United Way for a youth home in Kingston.

“I was approached by the United Way and they told me about our youth and how they fall through the cracks a bit in our city,” explained Smith. “There is a constant influx of young people who have run away or have been thrown out or have gotten in with the wrong crowd or are orphans. Many of these kids are drifters and don’t even have a place to sleep at night and I had no idea.”

According to the United Way, Kingston has one of the country’s highest proportions of youth in its city shelters. The national average is one in five and Kingston sees one in three.

“It is a little shocking,” said Bhavana Varma, CEO of the United Way KFLA. “It is also surprising that some of these kids are just 16 and they find themselves living on the streets.”

In an effort to combat this issue, the United Way has been working with local agencies, partners, volunteers and funders to coordinate a local initiative to end youth homelessness in the Kingston area. One of these initiatives includes developing support-based housing for homeless youth.

“I usually give money to the United Way anyways, but this required a bit more,” said Smith. “My children are all looked after now so I thought I would help other kids.”

Smith decided to give the United Way $240,000 a year for the next five years, $1.2 million in total, to fund a new support home for homeless youth ages 16-19. The home will be run by staff and volunteers at the Kingston Youth Shelter and will focus on providing youth with a stable living environment.

“It is a supportive transitional home,” explained Varma. “In shelters, youth tend to move through in 60 to 90 days and it is a temporary place. This will be a more stable environment with staff who are there all the time.”

The donation from Smith is the first million dollar donation in the United Way KFLA’s 75 year history and Varma was pleasantly surprised by Smith’s generosity.

“It is really a transformational gift. It is hugely generous and the impact it will have on kids’ lives is just amazing,” she said. “Brit has always been very generous. We hoped that if he understood the need he would want to help and luckily he did.”

Locations are already being scouted for the new youth home and Varma hopes that it will be up and running as soon as possible.

Smith is looking forward to seeing it operational and he hopes it will have a positive impact on the community.

“There is real need for something like this and I am happy to help,” he said. “Kingston is a great place to live and I want others to see that too.”

For more information about youth homelessness in Kingston and the United Way visit www.unitedwaykfla.ca.