Local philanthropist A. Britton Smith has taken out his chequebook once again, and this time the beneficiary is the United Way of Kingston, Frontenac, Lennox and Addington and Kingston homeless youth.

It was announced Thursday that Smith, the 95-year-old owner of Homestead Land Holdings, is donating $1.2 million for a homeless youth facility for young people 16 to 19 years old. 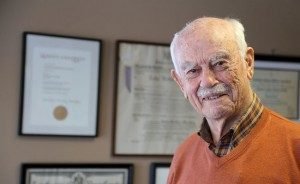 Kingston businessman and philanthropist A. Britton Smith in his office at Homestead Landholdings in Kingston on Wednesday. He recently donated $1.2 million for youth homelessness to the local United Way. (Ian MacAlpine/The Whig-Standard)

It’s the largest one-time gift given to the area United Way in its 75-year history .

“Life has been good to me and, as I’ve said, I don’t want to waste it by giving it to my children,” quipped Smith during an interview Wednesday at his Kingston office on Johnson Street. “I might as well put it where it’ll do some good.

“I can’t take it with me and I don’t have a long time to go,” added Smith, amazingly fit for a man five years shy of hitting the century mark in age.

The new facility will be managed by the Kingston Youth Shelter.

At the facility, the youth will be nurtured and receive help to turn their lives around. In addition to the shelter’s facility on Brock Street, where youth get to stay for short periods of time, the new facility will house the youth for one or two years.

“It’ll be a new transitional home. It’s not a shelter,” said Bhavana Varma, president and CEO of the area United Way. “They’ll stay like at a home. They’ll be there for a year or sometimes maybe two years before they move on.”

It will have a good capacity and have staff working there 24 hours a day.

Varma said she was “overjoyed and absolutely thrilled” when she heard about the donation.

“It’s going to make such a difference in the lives of these kids,” she said. “Having talked to a lot of the youth who are homeless, it’s so important that they get some stability in their lives, and this is really going to transform so we call it a transformational gift.”

Varma, along with United Way board chair Susan Nicholson and Gillian Sadinsky of its leadership and major gifts committee, approached Smith about a year ago about contributing to the project.

“Being the generous philanthropist that he is, he completely understood and came on board,” Varma said.

She added that the new facility is necessary because of Kingston’s high youth homeless rates: one in three people in local shelters are youth whereas the national average is one in five.

“One of the things we’ve learned that youth, especially really young ones, they need some stability before they can move into permanent housing,” Varma said. “Having access to a home with 24-7 staffing, getting some nurturing and support will really help them turn their lives around.”

The money will go into moving into an existing building and will fund the program and pay the staff for the next five years.

Varma said the United Ways hopes to keep it running beyond five years with future donations.

She said maintaining a facility such as this goes beyond what the United Way can do on an annual basis from its campaign contributions and the support it receives from approximately 50 other social agencies and programs, “but to make a difference in issues like youth homelessness, it needs the significance of something like this transitional gift where you can actually transform people’s lives,”

Smith recognizes the program as an important initiative.

“I realized that there is a big shortfall from what the government will do — and that’s three levels of government — and what the need is,” Smith said. “The United Way is able to help in some extent, but what they need is to get some of these kids off the street and to provide a new house with more bedrooms and someone to look after them.”

“Some of them fall into drugs and the next thing you know are suicidal. There are some very tragic cases out there,” he said. “This money, I think, will pay dividends.”

Smith hopes the program will lead to the youth members going back to school, gaining employment, becoming independent and perhaps reconciling them with their families.

Jason Beaubiah, the executive director of the Kingston Youth Shelter, said the new facility will be operated similarly to the home on Yonge Street for 16- to 24-year-olds.

There, the young people receive support and counselling for education, employment advice and life skills training.

“They’ll be getting the skills they need in a supportive environment,” Beaubiah said.

Facilities such as these will greatly reduce repeat visits from youth to their shelter on Brock Street, Beaubiah said.

“This is going to be a life-changing experience for a lot of kids,” he said.

Beaubiah added that the new facility will open as soon as possible, perhaps next month or in May. A lease is currently being negotiated on an existing home.

Once open, the facility will have two full-time and four part-time staff as well as five to seven residents.

Smith has made other six-figure donations to the United Way, and in 2007, along with his late wife Sally and Doug Hogeboom, made a $3 million donation to the University Hospitals Kingston Foundation.

In 2014, he donated $10 million to Queen’s University, with $9 million of the gift going to the School of Nursing and Department of Surgery and the remaining $1 million being put towards the Richardson Stadium revitalization project. The donation is the largest gift the 73-year-old School of Nursing has received.

Smith’s company rents out 25,000 units in 14 cities and communities across the province, including Toronto, Ottawa and London. Kingston accounts for 18 per cent of its business.

“This has been an accumulation of 60 years of frugal spending,” Smith said. “I’m a natural-born tightwad, so I suddenly realized I’m way overdue to start a little payback.

“I want to die with a clear conscience.”