Kingston, ON (June 6th, 2022) – The United Way of Kingston, Frontenac, Lennox & Addington is pleased to celebrate President and CEO, Bhavana Varma as the recipient of the George Hart Award (formerly the President’s Award for Excellence) from United Way Centraide Canada (UWCC). The award was presented at the UWCC leadership conference in Winnipeg, Manitoba at a breakfast on Friday June 3, 2022.

The award is United Way Centraide network in Canada’s highest staff honour with the criteria stating “it is awarded to an employee of extraordinary distinction on a local or national level. This award is bestowed upon a staff member whose commitment, vision, expertise and leadership have made a unique impact on his or her United Way and community.”

Bhavana was nominated for the award by staff at United Way KFL&A and the nomination received letters of support from the Board Chair and local dignitaries.

“I’ve had the pleasure of working with Bhavana for nearly eight years as Mayor. She is the definition of a community builder and is someone who deeply cares about the people in this region,” said Kingston Mayor, Bryan Paterson in his letter. “Her leadership was on full display during the pandemic where she was quick to act and helped our region navigate some very challenging moments and at a time when the United Way was needed most.”

In 1999, Bhavana was recruited to take over as the Chief Executive Officer with the United Way KFL&A, joining a United Way that needed leadership.

“Bhavana created new vision and purpose for the United Way of KFLA in a time in which it desperately needed revitalization,” said Member of Parliament for Kingston and the Islands, Mark Gerretsen in his letter of support. “My work has been made significantly more meaningful through the projects I am able to work on with leaders like Bhavana. Her wealth of knowledge and insight has been something I have relied upon to better understand the problems faced in our community.”

Over the past 23 years, Bhavana has led the community to raise over $68 million dollars while also being an active member within the United Way Movement serving on many national committees and working groups.

“Bhavana is a major asset to our organization and the root of our ongoing success,” said United Way KFL&A Board Chair, Patrick Murphy. “Our mantra is that our KFL&A United Way never sleeps. Bhavana is not one to sit back and let things happen. During the early months of Covid-19, Bhavana was front and center working day in and day out with virtual access. She was coordinating emergency funds for the vulnerable, helping the homeless and making sure money was available for food distribution. The United Way never sleeps, and Bhavana Varma doesn’t either!”

This recognition and award was a surprise for Bhavana who always puts the spotlight on the community, volunteers and donors well before herself.

“I am humbled and honoured to have received this award, on behalf of this amazing community,” she said. “It is a privilege to work for the United Way movement. This award is a recognition of the amazing dedication and commitment demonstrated by local volunteers, donors, frontline agencies and employees, and for this I am truly grateful.”

United Way Kingston Frontenac Lennox & Addington works closely with the community to ensure that people have the opportunity to reach their full potential and live with hope, dignity and a sense of belonging. Led by volunteers, driven by a small professional staff team, the United Way KFL&A provides inspiring opportunities for people to get involved and support issues they care about through volunteering, giving and being advocates for people who are in vulnerable situations. 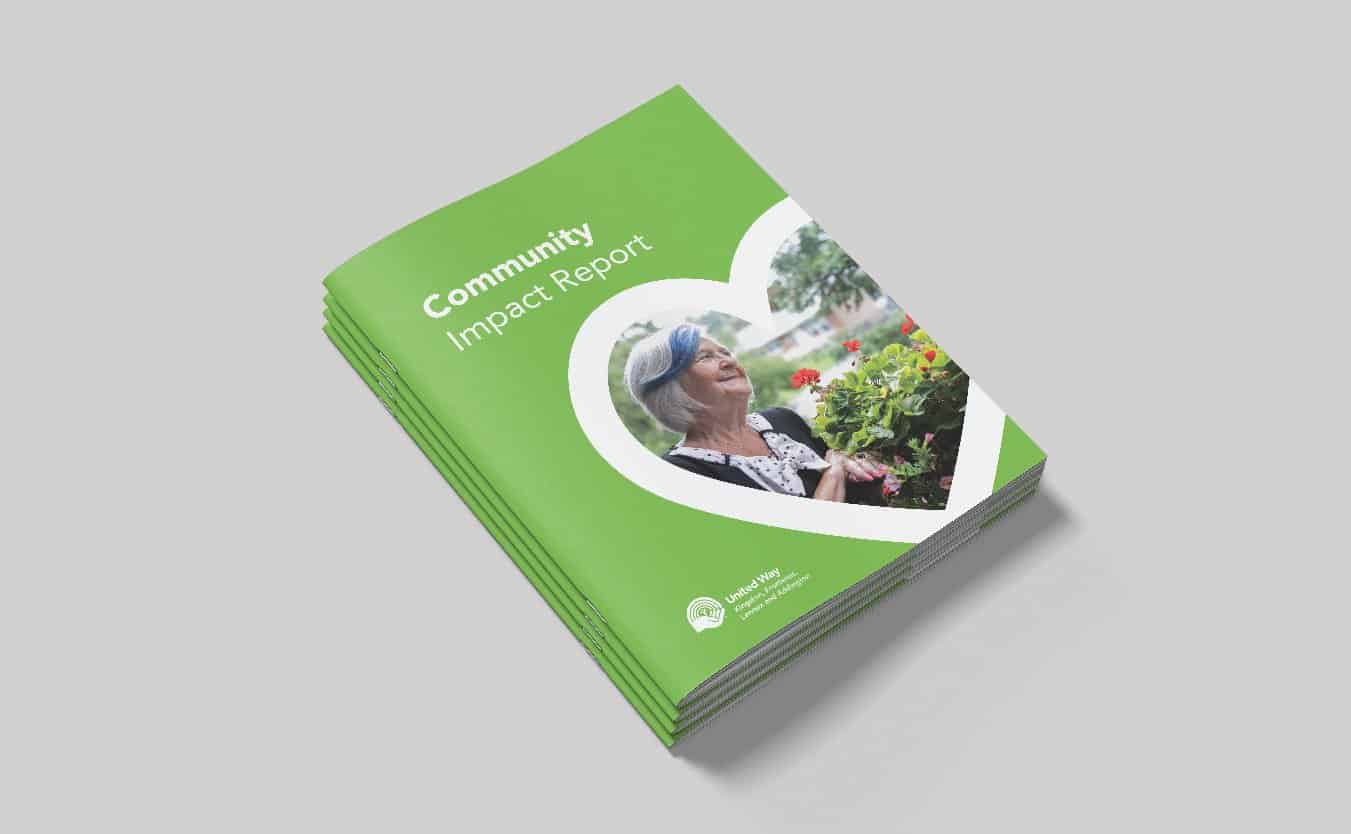 Learn about the impact of donations to United Way KFL&A and how local love continues to impact local lives throughout the community. 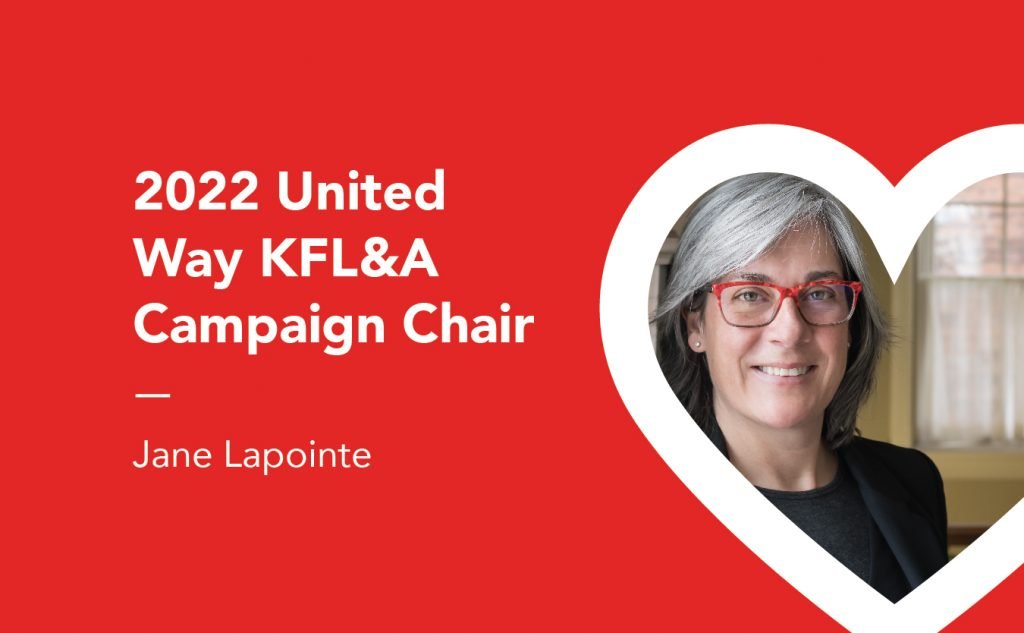 The United Way of Kingston, Frontenac, Lennox & Addington is pleased to announce the appointment of Jane Lapointe, Senior Wealth Advisor with Assante Financial – Fenlon Division, as your 2022 Campaign Chair. 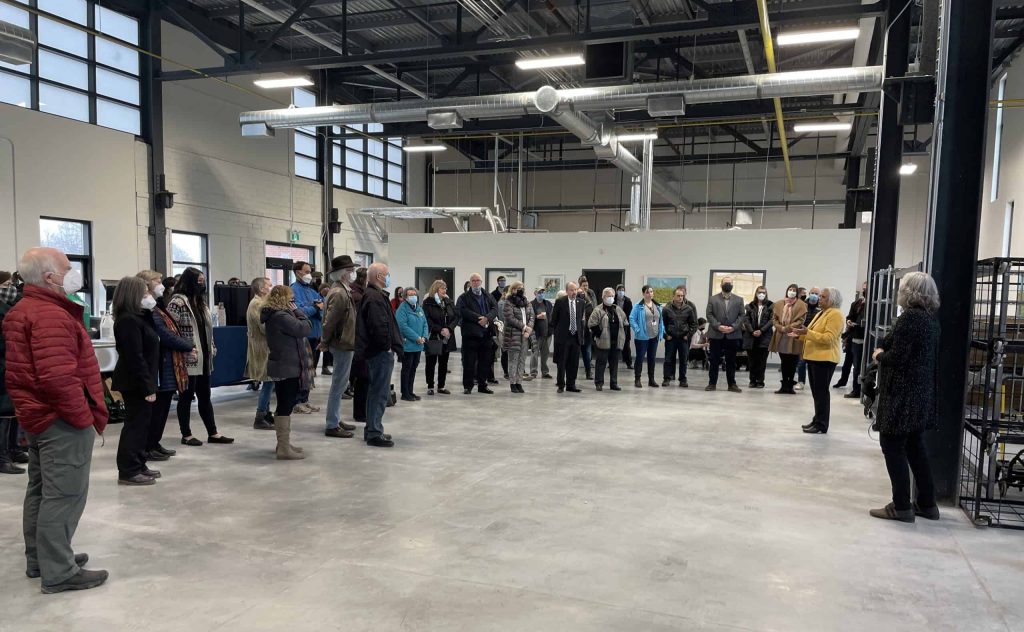 Partners are delighted to launch the new Community Food Redistribution Warehouse (CFRW) that has been collaboratively developed. Together, Lionhearts, Kingston Community Health Centres (KCHC), the City of Kingston, the United Way of Kingston, Frontenac, Lennox & Addington and other agency partners have spent the past year working collaboratively to make the CFRW concept a reality.

"My wife and I have always donated to the United Way KFL&A because we know the donated funds are used in our community. In my retirement, I have become more aware of the people in need in our community. I encourage you to support these vital programs by volunteering and by making a donation. Through the United Way you make a difference in the lives of so many."
Jim Parker
"With our United Way funding, we go right to the grocery store or a local supplier and purchase the food that helps a student take advantage of everything school has to offer. You can be confident that your donation to the United Way stays here, in KFL&A and supports students in our community"
Brenda MooreFood Sharing Project
“United Way came in and adopted us and things changed dramatically, we didn’t have people waiting on the step for a bed in the winter. They stay as long as they need to and we help them get into transitional housing. We provide them with structure and help them. Because of United Way we get to help raise these children and I feel honoured and so proud to know them.”
Denise LambKingston Youth Shelter
Previous
Next
Donate