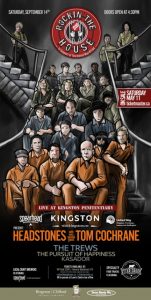 This Historic Concert will bring some of the finest Canadian talent together featuring Headstones, The Trews, The Pursuit of Happiness and Kasador with VERY SPECIAL GUEST Tom Cochrane

KINGSTON, ON. / May 8, 2019 – visitkingston.ca presents ROCKIN’ THE BIG HOUSE, in support of United Way of KFL&A, the first-ever public concert to be held on the grounds of the oldest penitentiary in Canada, Kingston Penitentiary (1835-2013).

On September 14, 2019, 2,500 lucky music lovers, history buffs and curiosity seekers will walk through the gates of Kingston Penitentiary to experience an outdoor music festival like no other in support of United Way. This is a rain-or-shine, 19+ event. Gates open at 4:30pm, show times at 6pm.

“This coming together of musicians who are both, from Kingston, or attached to Kingston in some way, playing for our United Way is heartwarming.  All of the performers jumped at the chance to play for us and to be a part of a concert in this storied venue,” says Joanne Langlois, co-chair of the event.  “It is important that our community recognizes that all of these bands are donating their time and their talent to The United Way of Kingston, Frontenac, Lennox and Addington. Due to their generosity 100% of the net proceeds is going back to the community.”

Hugh Dillon, lead singer of the Headstones, is originally from Kingston, but his career in both music and film/television has taken him to Toronto and LA. “We’ve been hoping to get back to Kingston for a while… we couldn’t be happier to be part of this historic event in support of the United Way.”  The Headstones have not played in Kingston since December 2013.

The Trews are this city’s adopted sons having developed a huge fan base here, and also having recorded with The Hip’s Gord Sinclair at the Bathouse Studio. The Pursuit of Happiness are fresh off of their 30th Anniversary Tour of their album Love Junk and their Guitarist Kris Abbott has lived in Kingston since high school.  Kasador is a Kingston-based alt-rock band who are beginning to make waves in the industry with their third release Brood and Bloom produced by Graham Walsh, Rob Baker and Gord Sinclair.  The Tragically Hip members, Paul Langlois, Gord Sinclair and Rob Baker will be special guests during this very special evening of Canadian music.

“Adding Tom Cochrane to the lineup was such a coup,” adds Joanne. “Tom gives so much of himself nationally and internationally already – in fact he was on his way to Vietnam when Paul reached out. To have Tom on this bill, in this venue, is more than the icing on the cake.”

“Thanks to the amazing partnerships that have been formed over the years, we are able to organize this one-of-a-kind event in Kingston,” said Scott Harris, Regional Deputy Commissioner of Correctional Service of Canada and 2019 United Way Campaign Chair. “We are looking forward to seeing all the bands in this historic venue and really jumpstarting our 2019 campaign with this event.”

Guests at the show will enjoy live music, specialty food trucks and restaurants, featuring Otter Creek Farms Food Truck, and beverages from local wineries and breweries. Spearhead Brewing Co., a local craft brewery, is generously donating all beer and proceeds from beer sales to the United Way. The event committee is working closely with the City of Kingston and all partners to make this as environmentally sustainable as possible.

Tickets are $75 inclusive of service charge and a limited number of Gold tickets ($200) will go on sale on May 11th at www.rockinthebighouse.ca or www.ticketmaster.ca Tickets can also be purchased at the Leon’s Centre box office on May 11th at 10am.  Special ticket and hotel packages can be purchased May 8th  to May 11th through www.visitkingston.ca

For more information about the event visit www.rockinthebighouse.ca

About United Way of KFL&A

United Way of KFL&A works with individuals, organizations and key partners to build and strengthen our community, bringing people and resources together to facilitate change. Our vision is a future where people are self-sufficient in a community, where individuals live with hope, dignity and a sense of belonging. Visit www.unitedwaykfla.ca for more information.

Kingston Penitentiary is known for housing some of Canada’s most notorious criminals.  Since the Kingston Penitentiary was shuttered in 2013, Corrections Canada has been working in conjunction with the City of Kingston and St. Lawrence Park Commission to offer public tours of the facility. These tours have been incredibly successful, selling out months in advance of tour dates. In fact, almost 230,000 people have been through the doors of the Kingston Penitentiary for touring purposes.  The net profit is split between the United Way of Kingston Frontenac Lennox & Addington and marketing efforts by the St. Lawrence Parks Commission and Tourism Kingston.

Founded in Kingston over 25 years ago, this will be somewhat of a homecoming for the iconic Canadian rock band led by enigmatic singer and actor Hugh Dillon (Flashpoint, Twin Peaks, Wind River). Headstones have had a long and established career in the Canadian music scene with hits such as “Smile & Wave” and “Tweeter and the Monkey Man”.  Headstones just came off a successful cross-country tour in 2018 and have recently been recording their next record in Bath, Ontario

An iconic career which started in the pubs and rough neck bars off the highways of Ontario, then Canada and the the world, has spanned over 4 decades and is characterized by creative, musical and personal integrity.  A few years into his tenure with Red Rider, they graduated to larger venues, halls, arenas and Festival stages. With and without Red Rider, Tom has released 17 albums and remains only one of 3 male artists to have a diamond certified album in Canada (over 1,000,000 Copies sold.

Throughout his career, Tom has thrown his support behind a wide range of worthy causes. He has traveled the world, including Africa 9 times and Asia twice on behalf of World Vision, has performed at Live 8 and, in Tears Are Not Enough video and entertained the troops in Afghanistan.  He endorses and supports Waterkeeper’s Alliance, Amnesty International, War Child, Medicin Sans Frontiers, World Animal Protection and The United Way.

Canadian rock music darlings formed in Antigonish, Nova Scotia in 1997 have five albums to their name including their latest 2018 release, Civillianaires. With songs such as “Not Ready to Go”, “Hope and Ruin” and “Highway of Heroes” they quickly made inroads in to the hearts of Canadian music fans.

The Pursuit of Happiness http://tpoh.net/

Toronto’s Pursuit of Happiness serves as a vehicle for the wry romantic ponderings of singer/guitarist/songwriter Moe Berg and plays a brand of power-pop influenced by Todd Rundgren who produced their first two albums.

TPOH has just come off the road from a sold out tour celebrating 30 years since their debut record LOVE JUNK, featuring their hit single “I’m An Adult Now”

Kingston-based alt-rock outfit Kasador spent their first 3 years cutting their teeth on the road, garnering attention from their engaging and high-energy live performances. Duelling vocals and dynamic guitars provide a strong base for the band, rooted in rock and funk. Kasador wrote and self-produced their debut 2016 EP ‘KASADOR’, which they toured extensively through Canada and the USA. Since, the band released a follow up 2-track single titled ‘Come Get Yer Money’ in 2017. Both tracks are featured on their upcoming full length, titled ‘Brood & Bloom’ produced by The Tragically Hip’s Gord Sinclair and Rob Baker – an album written through tough times and trying to find something