After hearing a brave, coming-of-age tale of an area woman supported by the local United Way, the organization announced that its 2019 campaign goal is 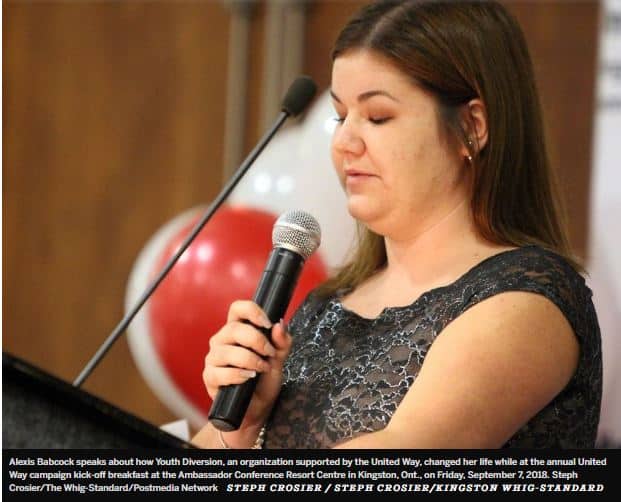 The goal was announced at the campaign’s annual kickoff breakfast, held at the Ambassador Conference Resort Centre on Friday morning. Alexis Babcock, who was helped by Youth Diversion, an organization supported by the United Way of Kingston, Frontenac, Lennox and Addington, told the about 450 people who attended the breakfast about her journey.

“It was heart-warming for me [to be asked to speak],” Babcock said, after her speech. “I’m very passionate about being able to give back to organizations that gave so much to me.

“Whenever I’m asked, I jump on it and give it my all because everyone gave it their all for me.”

Babcock’s journey started when she entered Bayridge Secondary School and her relationship with her parents crumbled. She developed depression, which caused her friends to avoid her.  She soon fell into the wrong crowd and started smoking cigarettes and marijuana. Sneaking out and defying her parents, one night they kicked her out.

Babcock couch-surfed until her grandparents took her in, but things still got worse in the summer before Grade 11. She developed a cocaine addiction and it took a toll on her mentally and physically. When she returned to school, her vice-principal put her in touch with Youth Diversion.

Despite working with the program, her life still spiralled, but youth counsellor Dave Breen didn’t give up on her, especially during one of the darkest times of her young life.

“Dave sent the police to my house to do a wellness check because I was having a rough go,” Babcock explained. “When I was admitted to the psychiatric floor, he came almost every day.”

Six years later, Babcock explained, she never would have expected to be standing before everyone at the United Way breakfast.

Read the full article at: https://www.thewhig.com/news/local-news/united-way-kfla-2018-campaign-kicks-off